What We’re Riding is a series about the bikes we’re currently putting miles on. Maybe it’s a new Mountain Bike, or an old Beach Cruiser we picked up because it’s pretty. Either way we’ll tell you about what it is, why we got it, and where we’re riding it.

So a lot of people are talking about Gravel Riding these days and the Bikeminded crew is no exception. Over the last couple years I’ve been riding a lot of training miles on gravel roads and dirt paths all over the place. Sometimes just a couple of hours spinning out the legs, sometimes way more. The cool thing about riding gravel is that you can cover a lot of ground in a short amount of time, without all the dangers associated with riding on public highways. Sure, there are some concerns like getting lost and wild animals, but more often than not you can get out in the middle of nowhere and just enjoy the ride. Or suffer with several faster-than-you friends, as pictured below…

Up until now I’ve ridden my Trek Top Fuel on these gravel rides. With big tires, full suspension and a familiar fit it’s a good option for sure. However all those steady gravel miles take their toll on tires, chains, cassettes, shocks, etc. With it only holding 1 bottle in the frame I am limited to how far I can go before it’s time to refill also. So I started keeping my eye out for something to serve that purpose more effectively.

Gravel bikes are pretty popular now and for good reason. They combine the rugged nature of mountain biking with the speed and efficiency of road biking. Actually, I realized how cool these bikes are over 10 years ago, building up a custom 2007 Brodie Romax complete with Avid road disc brakes and aero SRAM Rival 10 speed shifters. Truly ahead of its time, back then it took some custom work just to get the thing up and running, but now the category is more mature and it was time to jump back on the train. That Brodie is a pinch small for me, and with Jemma commandeering it for gravel/road adventures of her own, I knew I needed to get something to ride.

Many of the gravel bikes on the market come from a Cyclocross geometry which makes a lot of sense. Cyclocross bikes are all about being lightweight but durable in adverse conditions, with clearance for bigger tires than a road bike, often with a little compliance built in to smooth out the bumps. The men’s and women’s winners at this year’s Dirty Kanza 200, arguably the largest gravel race in the world, were aboard Cannondale Super X, a cyclocross race bike. While there are arguments to be made for a gravel-specific bike over a cyclocross race bike (more stable ride, lower bottom bracket, longer chainstays, relaxed position etc), the concept is still evolving so I’m interested to see how it Diverges from classic cyclocross geometry in the future (pun intended).

Always scouting for deals, I noticed Trek was closing out some of their last years models a few months ago. One of the steepest discounts was the 2017 Trek Boone Race Shop Limited, a full carbon Cyclocross Race bike used by Sven Nys for the last few years on his World Championship Cyclocross campaigns. A full-carbon race bike with a Shimano Ultegra groupset, lightweight wheels, and an obnoxiously bright paint job, I was immediately sucked in. At a discount of nearly 50% when compared to other comparable bikes in the Trek catalogue, I looked and knew exactly why it was so cheap: Cantilever Brakes. Disc Brakes have moved over from mountain biking first into Cyclocross a few years ago and now the Disc Brake Invasion has arrived to road bikes. For my intended use, pounding out gravel miles and not racing cyclocross in mud/snow/rain I knew the disadvantages of traditional Cantilever brakes would be less significant. Plus the rim brake bikes tend to be lighter, and this one was no exception coming in under 18 pounds with Shimano XTR Race SPD pedals. It looks like 2017 is the last year Trek is making a cyclocross bike with rim brakes, so this thing was on closeout and had to go. I called up my local Trek dealer, Beyond Bikes and told them to order it. The only change I made was to put on some gravel specific tires, the Panaracer Gravel King SK in 700x38c (set up tubeless with Orange Seal Endurance Sealant of course).

I’ve taken it out on a few gravel rides (and even a trip down some singletrack) and it performed flawlessly. The Trek Boone has ISOspeed dampening in the frame to allow some flex in the seatpost of the bike which does a nice job smoothing out some bumps to keep you fresh as the miles click off. I’m looking forward to putting more miles on this bike in the coming months but so far the ride is smooth and fast, able to sprint in a snap on road rides or just clip along on gravel hour after hour. Shifting the training miles from my Top Fuel to the Boone should keep the MTB fresh for races coming up this summer and fall, more to come on that soon! 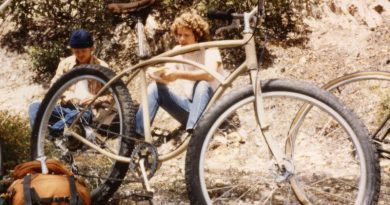 If my friends were cycling socks…