My Top Fuel came with SRAM Level TLM brakes which I have really enjoyed. They have a great lever feel, wide range of modulation and very light weight which have served me well over the last 2 years. Having used other popular brands before like Shimano XT or Shimano XTR, I enjoyed having brakes which were more nuanced and adjustable than the on-off feel of Shimano.

My SRAM Level brakes were utterly reliable but I know that is not case for everyone.  I only had to bleed them twice in 2+ seasons of use, but the bleed process for SRAM brakes is a bit involved.  Using a SRAM Pro Bleed kit on older SRAM brakes I’d had in the past, I was very familiar with the 2 syringes, degassing of DOT brake fluid, and all the specific processes required to get them to feel good and consistent.

The new SRAM Level and Guide brakes use a slick new fitting called Bleeding Edge which makes it a bit easier, but I am no pro bike mechanic and bleeding brakes once a year makes it hard to be good at it.  I would just take the bike into my local bike shop when the brakes needed service, but I knew I’d like something I could work on myself if I was away on a bike trip far from home.

I had ran Hope Tech brakes before on my Single Speed, specifically the Hope X2 with Tech 3 levers.  If you’ve never heard of Hope Brakes you’re probably not alone.  Check out this link for a Hope factory tour, but basically they’re a bunch of British guys with moto/trials background that were on the cutting edge of disc brake technology in mountain biking and wanted something that worked better and more reliably than the other brands on the market. With anodized and CNC machined monoblock calipers and levers with real adjustment knobs, I really love the feel of the Hope brakes on my SS.

If you’ve ever bled brakes on a car or motorcycle you’ll have no problem bleeding these with nothing more than an 8mm box wrench and bottle of Dot 4 or 5.1 brake fluid.  Simple gravity bleed, no need for syringes or baby oil that other brands require.  Check out this bleeding instructional video:  Brilliant!

Since this is the diet series, once I knew I wanted to upgrade the brakes to Hopes I had to get the lightest ones they make: the Hope X2 Race brakes.  The calipers are the same X2 caliper that I’m familiar with from my other bike, but the levers are a ultra light version with only reach adjustment.  I was a little leery giving up the bite point adjustment as well as the ability to adjust both on the fly, but the scale convinced me and I got the lighter ones in.

The fit and finish on these (and all Hope products I’ve purchased), is top notch, and I was struck by how feathery the brakes felt in my hands.  Hope includes very light hardware with the brakes, Titanium bolts for the rotors and calipers, and alloy bolts for the lever clamps. I weighed the Hope brakes right out of the box with uncut hoses and they came in at 214g and 228g for front and rear.  The Sram Level brakes came in at 222g and 241g with trimmed hoses, so even though they are a very light brake the Hope Race brakes are even lighter. The SRAM Level lever weighed in at over 100g whereas the Hope Race lever was under 80g, just to give a sense of where that weight is coming from.

After fitting the brakes front and rear, routing internal hoses, trimming lines and bleeding the brakes the total weight savings came in at around 90g, with the new bike weight at 23.06#.  I only have a few rides in on the brakes but so far I do not miss the additional adjustment lever of the Tech 3 levers, but if I ever did it’s a simple swap from one bike to another. At over $4 per gram saved this is not an economical place to shave weight by any stretch of the imagination, but this move was more about ease of service (and looking really good). 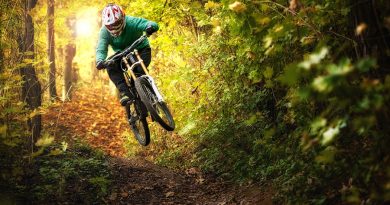 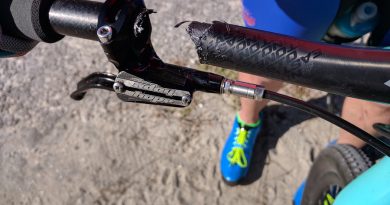