Last summer I prepped my bike and trained my body to go tackle ORAMM, and I was looking for a new challenge for summer 2018.  There are lots of races out west that I’ve always thought looked cool like Leadville and Breck Epic, but when you live at 7 feet above sea level, (Yes, seven. Not seven thousand, or seven hundred. SEVEN.) those high mountain trails pose a whole new set of issues. With the lack of oxygen and steep grades of the Rockies I wasn’t sure how my flat-lander legs and lungs would tackle something like that, so I found a perfect race to test it out: the Steamboat Stinger 50.

Starting at 6500’ above sea level at the base of Emerald Mountain in Steamboat, the course is 90% single track climbing up to 8600’ or so.  Compared to Leadville starting over 10k above sea level and Breck Epic starting at 9k+ every day, I figured this would be a good way to dip my toes in the high elevation game. The course was a 26 mile loop climbing up Emerald Mountain, then down the backside, up to another peak, turning downhill again, back up the backside, then bombing back to the start-finish line. Then if you’re doing the event solo like I decided to do, you go back out on course for another lap of the same.

Compared to some other races like Leadville which feature large amounts of gravel roads and doubletrack, the Steamboat Stinger course is over 90% flowing singletrack.  Having ridden mostly east of the Mississippi before I didn’t really know what to expect of true Rocky Mountain trails and previewing the course the week before the race showed me it wasn’t TOO different from what I was used to.  Loose kitty litter gravel over hardpack in some sections, a bit of sand due to the dry and dusty conditions Colorado has had this year combined with a root and rock or two wasn’t that different from a ride in south Florida, other than the fact that the climbs weren’t 30 seconds long and punchy, but 1hr + and gradual and the descents were a true test of your brakes and guts of course.  With about 8k feet of total climbing over 50 miles it seemed “easier” than ORAMM last year (62 miles and 13k feet of climbing), but the starting elevation is a variable I wasn’t sure about.

We got up to Steamboat Springs 7 days before the Stinger, which was a good amount of time to acclimate to the elevation and get in a few rides at 3 different mountains in town.  They don’t call this place Bike Town USA for nothing, driving around you see tons of bikes and people riding everywhere. The folks at Wheels Bike Shop on Yampa were super helpful with getting a few people in our group some awesome rental bikes and they even told us about the Wednesday night Town Challenge XC race on Mt Werner which ended up being a great test prior to race day.

As you all know I kinda like to research and prepare for things but I was going into this race a little differently with no expectations or pressure.  That said I wasn’t going to go in blind, so I reached out to defending Steamboat Stinger 50 champion and cycling coach Chris Baddick for a few tips on what to expect. Chris gave me some tips and thoughts on nutrition, pace, and goals which really helped me get a good plan in place to survive the race day. I figured I’d be in for roughly a 6 hour day, so talking to a guy who smashes the course in 4 hours flat and lives at elevation is comparing apples to oranges. He was super helpful though, and after pre-riding the course I had a pretty good idea of what the day was going to hold and how I would tackle it.

The race was split into 3 waves: pro/open racers, duo/relay teams+singlespeed, and then citizen/regular joes+clydesdales last (me).  It was nice because the waves were staggered by 10 minutes, allowing the traffic to thin out which was especially helpful for my wave of over 300 racers.

Because we had to line up early (and I wanted to be up front) I didn’t really get a warm up but hoped for the best. My friend Sarah was in the pro/open wave 20 minutes ahead, so my goal all day was to try and catch her.

The announcer asked if anybody was from outside Colorado and I told him I was from Florida. Turns out he had just been the announcer for Breck Epic and he was super impressed by the women’s duo winning team of Jen Moos and Beata Wronska from south Florida. Those of us who’ve ridden (and gotten smoked) by those two here in Florida weren’t surprised they did great in the 6 day stage race, and I hoped to channel some of their strength for my 1 day racing in the mountains.

When the gun went off I hit it just like an FSC race, going hard on the gravel road up the mountain to the first singletrack section about half a mile in.  I went into the trail 4th overall, which started with a loose and rocky grade over 20%. From what I heard the riders behind me had to get off and walk that section, but I was free and clear with the lead group.

Having no dreams of staying with those fast guys and knowing what power levels I should theoretically be at for a 1 hour climb, I dialed it back after about 5 minutes and watched a train of racers start to come past me.  They wished me luck and nicknamed me “Florida” as they cruised past on the first climb up Emerald mountain.

Even though I’d dialed the pace back considerably and was getting passed by dozens of riders, I was still going too hard, getting to the top in under 50 minutes at the first aid station (which I blasted through). We had started to catch the back end of the duo/relay riders on the climb, and as we descended on the Ridge trail down the back of Emerald mountain we certainly found more.

That trail is a series of switchbacks ripping down the mountain, and while they’re a blast to ride, when you’re coming up on traffic it gets dicey.  I did go over the bars when a racer in my class came up on a duo/relay rider at Mach 3 and locked up the brakes and I had no time to react. Luckily I got up and got back rolling, but then chasing to get back on I went down again. One lesson I learned at ORAMM was that while I can descend pretty well I’m only going to shave seconds off the competition so it’s not worth the risk.

I settled in for the rest of the descent and rolled into the 2nd sag and grabbed some water to refill a bottle of my Infinit nutrition custom mix I had in a little baggie in my jersey pocket.

Since I guesstimated I’d be in for a 6 hour day, I figured one refill of my Infinit mix each lap combined with starting each lap with 2 full bottles would give me the calories and electrolytes I needed.

Going from the bottom of the Ridge downhill trail up to the start of the Beall trail climb is a ~10 minute gravel road slight climb, which was a good time to drink up and get ready for an 8.5 mile climb back up to the top.  And also a good time for selfies.

The Beall trail was a beautiful climb, with sections of aspen and pine forest leading up to exposed mountaintop views.  There was a “special” sag stop close to the top which had no water, only bacon, whiskey, and beer. Since I wasn’t up front contending for a podium spot, I took full advantage of this sag stop on both laps and I can definitely say some liquid courage helped me close some gaps on the following downhill back to the start finish line.

The descent back down had some awesome sections of trails like Root Canal (nothing like our palmetto roots though) and Little Moab (just straight rock garden descent FOREVER), as well as smooth flowing switchbacks through the forest back to the bottom.

Coming from South Florida we know how to deal with heat and sand, and with record temps and dusty conditions I saw racers stopped on the side of the trail cramping and resting.  We actually had a cooler at the start/finish line with a fresh set of bottles as well as a few ice socks to throw in our jerseys for Sarah and I to stay cool. I had a quick pit stop to swap bottles and grab ice, and rolled into lap 2 around hour 3 or so.  I was definitely starting to feel the high pace early, but fortunately I wasn’t overheating or cramping like so many others did. In the end there were actually 20 DNF’s in my class and even more who never lined up knowing what kind of conditions the day would hold for even the locals.

Just as I was starting to fade I saw my friend Sarah a few switchbacks ahead of me. I had caught her! I felt good and kept on pedalling up the mountain to sag #1 where I took a bottle of water to drink and dump over my head.

Being a little smarter on the Ridge DH this time I carefully navigated it passing a few people but mostly just rode solo. If you ever go to Steamboat you should do the Beall-Ridge loop, it’s pretty dang fun for sure. At the bottom I grabbed another bottle of water to stay hydrated in the dry heat approaching 90 degrees as I entered the last climb.  Right before I started Beall for the last time I refilled an empty bottle with some Infinit Jet Fuel mix to give me a little caffeine boost to shoot up the last hill. While I’d say my pace was far from quick, I was able to motor up it without stopping until I got to the beer/bacon/whiskey stop where I took a second for a quick selfie with my new best friend, Mr. Whiskey-Handup.

Coming to the last sag at the top of Beall I grabbed a bottle of water and knew I had a 40 minute DH to the finish.  The descent was technical with some roots and rocks, but riding the flat technical trails we have in Florida prepared me well, so I set a goal of passing at least 1 person on the last decent.  Luckily I was able to pass 2 even though I was completely gassed, and even able to ward off a 3rd dude coming up fast on me at the end.

I crossed the line at 6:28 for 57th overall, feeling like I’d survived for sure. The heat took a toll on us all so I took a bit of time in the shade with a cold beverage while my friend Sarah was close behind me finishing under 7 hours in the open women’s class.

I learned a lot in this race: 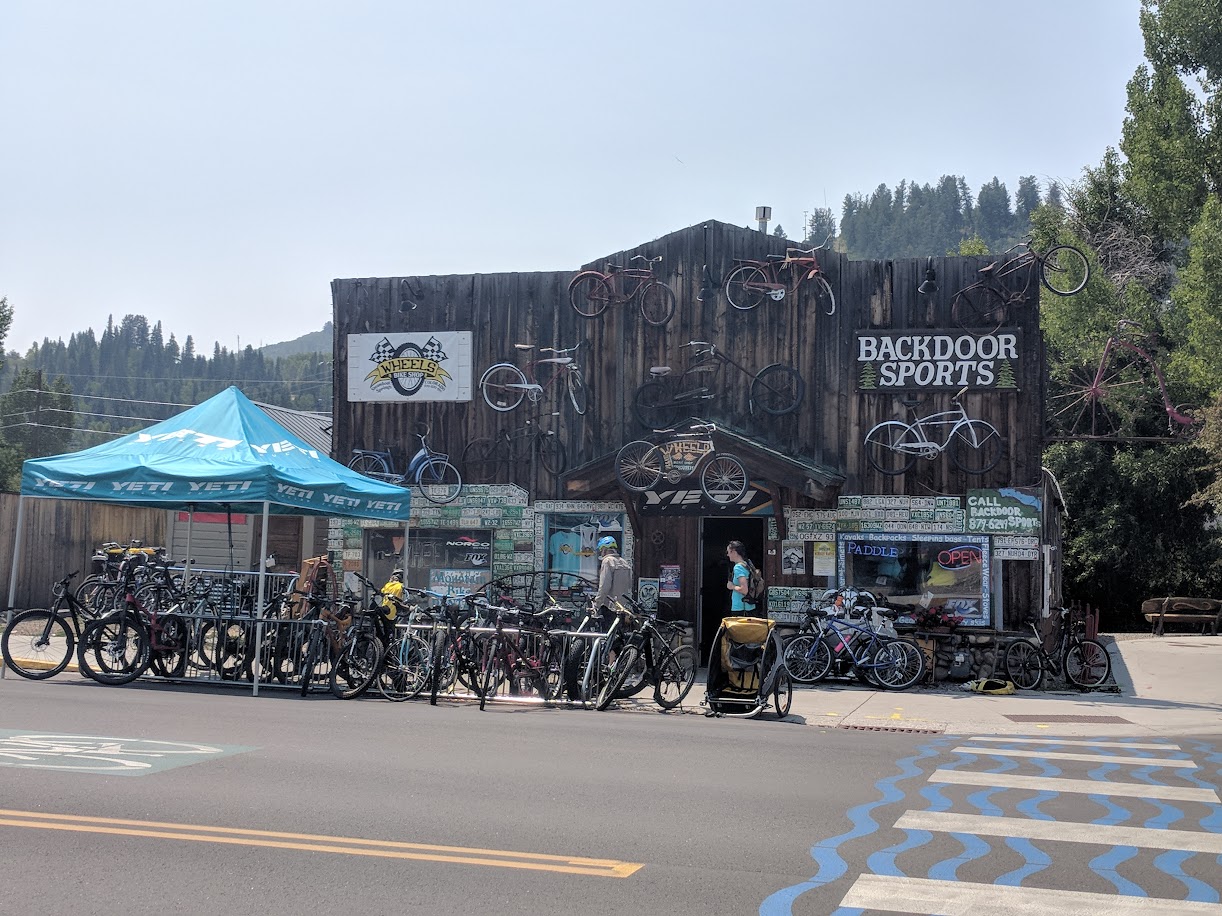 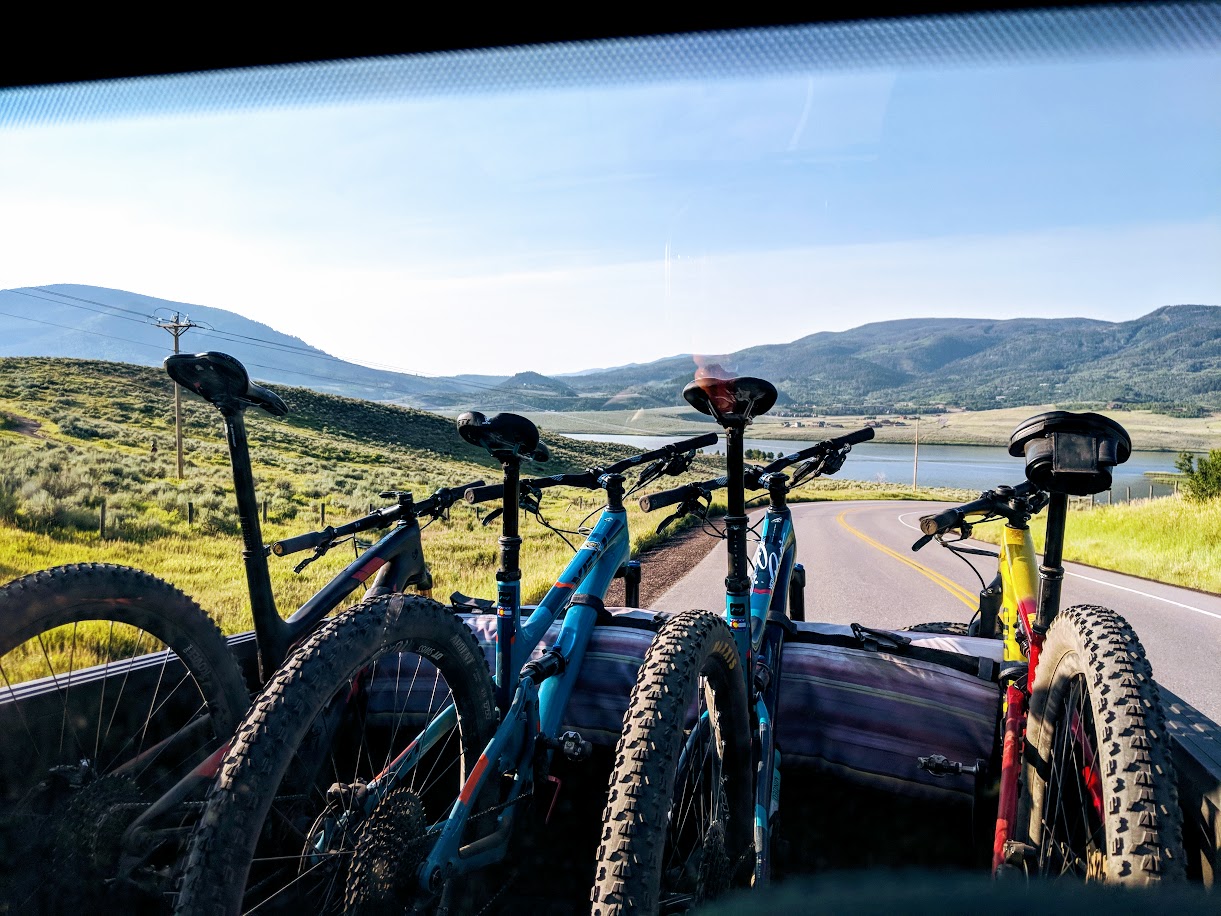 All in all it was a good race, and now we’re left wondering what’s next.  Where should our next adventure be?

Jemma as usual, was out hiking (not in flip flops this time) and grabbing photos of us and everyone she could manage. So if you were racing, please take a moment to register and gain access to our full 2018 Steamboat Stinger 50 MTB Race Gallery. Here are a few teaser photos to get you stoked. 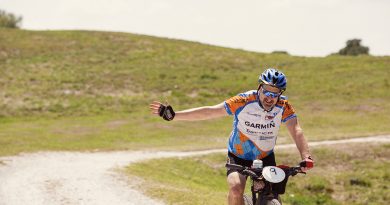