So, you may have noticed that we have water bottles available in our store now.  Instead of just putting them up there, I wanted to take a bit to explain why these are the best water bottles you can get in my opinion.  I’ve tried just about every model out there, and I keep coming back to the Specialized Purist 22oz (occasionally 26oz) bottles with Watergate cap.  You’re probably asking, “why is this different from xyz water bottle I’ve used before”. Well, lemme tell you…

The Purist line of Specialized bottles use a coating technology they bought from a company a few years back called Squeezable Glass.  Those smart folks figured out a way to put a thin coating of Silicon Dioxide on the inside of a plastic bottle. Silicon Dioxide is basically glass, which normally isn’t flexible. How did they do it, man I dunno, but it does a great job of keeping the bottle from locking the flavor of that stuff you put in it from a gas station that one time because you were on a long ride and then you left it in your car for a week and whoo boy it’s a science experiment in there.  I’ve had these bottles get funky before, and 95% of the time all you have to do is soak them in some hot soapy water and they’ll hose right out. The other 5% of the time might require a squirt of bleach to kill the funk, but in general you don’t have to scrub them out ever because it will rinse right out.

I don’t know how to really measure this, but how squeezable a bottle is matters to me.  Like, if it’s too wimpy and floppy the water just shoots out as soon as you grab it out of your cage.  If it’s too stiff you feel like you’re trying to get a hand workout while you’re riding your bike. How pliable a bottle is seems to vary with temperature of contents and its surroundings, but in my experience the Purist bottles always are in a good range of not floppy but not too stiff.

What color bottle you’re using is totally a personal choice.  Do you match it to your kit, or to your bike, or shoes? Tough to say what the right answer is here. But I do know that when bottles are lighter colors they’re easier to see what kind of funk is growing in them once they’ve stayed in the back of your car for a week.  Black bottles? Man, you never have any idea what’s up with those. So once you’ve decided on a lighter color bottle, I’ve found the ones that are colors not normally found in nature seem to be easier to find when you intentionally or unintentionally eject one in a ride or race.  We ordered turquoise bottles because they match our kits, are light colored, and don’t blend in easily with underbrush.

I may catch some heat here (pun intended), but I don’t like insulated bottles.  They hold less water than an equally sized non-insulated bottle, and the Camelbak bottles (which I think are the most popular insulated bottles on the market) are too stiff due to the multiple layers.  Specialized Purist is doing a Chromatek insulated bottle which may eliminate that pliability concern, but we’ll get back to you on that. UPDATE – the pliability is just as good with the Specialized Chromatek as with their regular bottles – and I got overruled on the order, so we do have a nice insulated bottle for those of you who dig those and we’re seeing them sell well already. I believe, since we live in South Florida, even if you load the bottle up with ice, it’s going to melt before you get to the bottom of the bottle, insulated or not, so I go for more volume personally. For some I guess every extra moment of coolness counts, and we wanted you to have the option. Jemma designed these pictured below, a little bit of a change from the regular bottle design but still bright and fun and easy to see on the ground.

There are lots of different lid ideas on the market.  We chose the Watergate lids for these, which have a check valve in them while also offering a push-to-lock feature.  The check valve does a good job of keeping the liquid in the bottle until you’re ready to drink, even when in the open position, versus a classic open/close lid which sprays all over when open.  I’ll close them when they’re in a secondary bottle cage I’m not actively using, in my jersey pocket, or just in transit in my car so it doesn’t leak at all in case it gets squeezed inadvertently. These lids are also pretty short versus other lids on the market with check valves like the Camelbak bottles, so they give you a little more clearance if your frame is tight for a 26oz bottle.

There is a groove in almost every bike water bottle, which is used to help hold them in the cage.  Some bottles have a very shallow groove, which results in a weak retention of the bottle in many cages when physics attempts to eject it.  Our bottles have a nice deep groove with a good angle, so it stays put pretty well. No need to put sandpaper or rubber bands on your bottle cages to keep these secure, they seem to do fine with several different designs of bottle cages I’ve tried.  Seems like most reasonable sized ice cubes also still fit through the opening as well. Finally, this groove helps the bottle stay in my back jersey pocket really well, with the elastic of the pocket holding that groove perfectly.

There are 2 different sized Purist bottles and we got them both. Technically 3 interior sizes when you count the insulated bottle. Ideally you’d run the large 26oz bottles, but many bikes may not allow clearance for those due to small sized frame or rear shock interference etc.  I tend to use the smaller 22oz size on my mountain bike, though for longer races like the Hammerhead 50, I’ll use two 26oz bottles as they juuuust fit in my frame with one in my pocket.  It’s 4oz and about 2” difference between the two, so pick whatever works for you.

So, we put entirely too much thought into these water bottles, but what else did you expect from The Analyzer and the Bikeminded crew? Check them out in our store if you need a new pair or catch us at the next event! We’ll be at Haile’s Trails for the last Endurance Race and the Steamboat Stinger, but need to find some other fun summer events, any ideas? 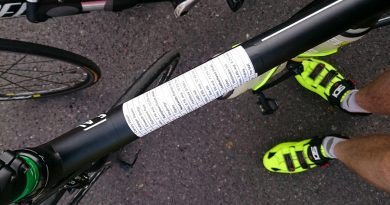 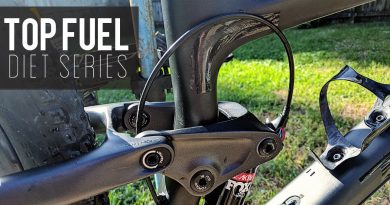