For the 2nd round of the Club Scrub Challenge Series, we had a completely different type of race planned than the Endurance Race round 1.  A Cross Country Short Track race is typically a very short course with lap times from 3 to 5 minutes that racers go through for about 20-30 minutes.  The course needs to have good passing zones as there is typically a lot of action in a short amount of time and distance, as well as some challenging sections to separate the group.

Planning the course for a few months I went through several different iterations and finally settled on a ~1.5 mile course that included sections of asphalt, dirt roads, rock gardens, climbs, and of course the JD favorite: Sugar Sand.

Unlike some other Short Track races where all classes and skills are released on the track together, we separated into 3 separate waves for Beginner, Intermediate and Open so that there weren’t as many problems with passing and being passed.  With the course layout I knew it would be a brutal battle for the top of each category while also being accessible for new riders to get a taste of racing.

We had a bunch of first time racers in the Beginner and Intermediate classes, and from where I sat in the Timing tent it looked like everyone was having fun as they whizzed by in the first two waves.  The course was fast and loose, with a nice headwind picking up as the day went on and temperatures were rising.  Unlike normal races where the Open/Expert riders go first, we flipped the start order and had Beginners go first, then Intermediates, with the Experts going last.  Hottest part of the day, most wind, course was torn up from all the other racers: if you want to compete for King or Queen of JD you’re going to have to earn it!

Just like the first round, after working to help run the race I threw my hat in the ring and raced it too. As all the Open men lined up for the start you could tell it was going to be an epic battle.  All the names at the top of any local Strava leader-board were there, and a few other top racers were on the line, ready to do battle for 5 laps.  I had no chance to warm up, just lineup and race! When the whistle blew we were off and blasting into a headwind.

First turn was a custom berm Dorsey made just for this course, and the first half of the guys flew up it. Those of us at the back of the pack had a bit of traffic to work through but we jumped right into a nasty rock garden section at an insane pace.  After the rock garden we popped out onto a section of asphalt and the racers were sprinting wide open to the next corner at 20+mph.  So, about that next corner: yeah, it was sugar sand and 8 inches deep.

It took its toll on racers all day for sure with several people going down into the sand and coming up looking like a powdered donut. After that sandy turn (full of spectators/hecklers which made it even more fun), there was a long hilly straight away with a little more sand before the next section of singletrack.

Diving into that singletrack I was struggling to breathe, and climbing back up to the asphalt road with burning legs we sprinted to the finish line to start our 2nd lap.  I found some other racers to pace with and start working up through the pack from the back.

Each lap I pushed a little harder and it seemed like some who started at the front were fading from the insane pace of lap 1.  This Short Track race ended up being a little longer than 30 minutes due to conditions with the heat and wind, so we were all starting to hurt from the pace.  I could see some of the fast guys up front getting closer and closer, but in the end I ran out of time to reel them in. Probably all of that endurance training over the last few months had my legs ready for the long haul instead of a sprint, but the end of the day I was able to out sprint my buddy Tyler (who beat me in the last race) to finish 14th in Open class.

The race was tons of fun, and we had great feedback from all the racers, newbies and experienced alike. The best part was all the friends and family that came out to cheer and heckle.  With bells, horns and shouts it was a great scene that allowed everybody to have fun and support the trails.

We’ve got one more race left in the series on April 15th, a traditional Cross Country race.  I’d encourage you all to come out and enjoy some of the best that Club Scrub at Jonathan Dickinson State Park has to offer: Berms, doubles, tabletops and more.

That’s me and Tim Zimmerman, the winner of Men’s Open at the Short Track. He’s tied with Matt Nalesnik for points and so it will be a winner takes all at the last race, if it comes down to a tie for points. The next race should surely be a thriller of a spectator event! We’re saving the FAST for LAST and also doing LADIES FIRST, an all-women’s wave to make it a nice fun experience for all the girls to get to race together!

Jemma was super busy the day of the race but she managed to snag a few hundred shots once things were under way. A nice bike shop owner named Jeff was there camping for the weekend and also took many of the photos and helped film during our facebook live, how cool is that for the BikeMinded community coming together? We really hope you enjoy them, check out the full JD Challenge Series Short Track Race Gallery and sneak peek below! 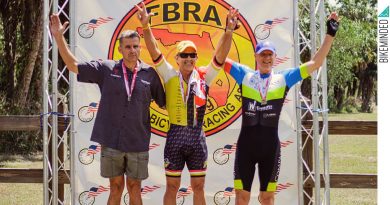