This fall I decided to try something new and do some Cyclocross races.  Cyclocross is a strange little niche in bike racing where you end up riding, running, and jumping around a short circuit on a skinny tire bike.  It is super popular in Europe and the Northern parts of the US where the winters make the courses full of mud and snow. Down here in Florida we don’t get that, but we do get the general elements: short intense climbs, barriers, dismounting and a full gas effort for 30-50 minutes.

The folks at Wicked Awesome Racing hail from the northeast where ‘Cross is king and they bring that to Florida.  I had done one cyclocross race before but this course was a much higher level of difficulty. There were plenty of sections of off camber grass that were much tougher to navigate on skinny tires at race pace, the barriers were way too high to even consider bunny hopping for a newbie like me, and the grass just sucked the power out of your legs.

Coming off a weekend of racing in the Ozarks for 5 hours I figured I had the legs to do a couple of these short easy races. This was my first mistake.  I signed up for 2 races on Saturday: Masters 35+ and Cat 4/5 . The Masters race was longer at 45 minutes compared to the 30 minutes for Cat 4/5.  The other thing I didn’t realize is that Masters was my first of the day and an Open Class, meaning there were Cat 1/2/3 guys in there. I’d be way out classed but what better way to jump in but to the deep end? #fullsend as we like to say in the MTB world 🙂

Once the gun went off man were those guys moving!  Coming from mountain bike racing I knew the “holeshot” was important, so I moved up to the front as much as I could going in to the “trail” in the front group.  Unlike mountain bike racing, the pace did not settle down at this point. No, it kept ratcheting up, my heart rate is pegged and I’m getting passed by all those guys who started smarter than me.  Lap after lap I started to get a feel for the flow of the course, how the bike handled these conditions, how to somewhat gracefully dismount and remount my bike for the barriers. I was able to finish strong and somehow ended up 4th in my age group, which was pretty cool!  While definitely off the pace of the top dogs it was a good barometer of how this ‘cross thing was going to go.

Waiting around for a couple hours before the next race started, I got to see some of the other men and women racing and suffering.  It was cool to see the different lines and techniques employed, including unclipping and running through sections that I rode through.  Sometimes riding isn’t the fastest option it appears, which will be something to learn for each course. Warming up for the next race I knew I’d have to send it hard early as a short race meant full effort from the gun.

One thing that was on the table in both races was a $25 prime for the racer who leads the first lap.  This spices things up and ensures the pace will be high. In the Cat 4/5 race my friend Tyler went out hard and snagged the $25 with a monster effort.  But he paid for that effort lap 2, and I was able to get past him and start to form a good gap for the race.

Unfortunately in a rooty (haha but not the kind of rooty I’m used to) section my chain popped off and got stuck under the chain keeper, forcing me off my bike and into kicking the cranks to get it unstuck.  Tyler raced by and after 4 laps I came up just short for 2nd place. If I was going to lose to anyone, it’d be him since we’ve been training together for a while now and I know he puts in the work.

One day of racing under my belt I’d learned some things and we packed up to rest before day 2.  Oh yeah, Cyclocross races are usually 2 day events, so I wasn’t doing 2 races: I was doing 4! You can do as many as you want, some racers focus on one specific class to compete but I was there for the training and experience so on day 2 I decided to do the same thing again: Masters 35+ Open and Cat 4/5.  More people showed up on Sunday as most bike shops are closed, so the level of competition was going up even more. Luckily I didn’t have to race against National Champ Ryan Woodall as he was just there to crush it in Cat 1 (and eat some hot dogs).

Lining up for the masters race I went out hard and was able to get up near the front for the first lap or two, but reality set in and many of the competition started coming by me as the race wore on.  I made a business decision midway through the race to moderate the pace a bit in hopes I’d have some legs left for race #4. The hard pace early meant all ended up doing an extra lap, so the race was closer to 55 minutes instead of 45 for me.  I barely finished on the lead lap, as the winners had almost lapped me but I did finish 5th which wasn’t half bad. My MTB buddy Matt showed up for Sunday and did well in the Masters race, finishing 3rd.

Sunday was definitely warmer than Saturday, so I hid under our tent and tried to stay cool and hydrated leading up to my last race of the day. There was a big group of cat 4/5  guys streaming in all day to compete for this race, and I knew I’d be facing guys with fresh legs which was not in my favor. Again there was a $25 Prime for leading the first lap so when that gun went off my buddy Matt hit out hard.  I was happy to let him win that knowing that I stood a decent chance of hanging on at a steady pace and placing well. The course had deteriorated after a weekend of racing and the off camber was very treacherous, a momentary bobble and I was able to pass Matt for the lead!  I pushed hard but stayed just in sight of him, we raced together for most of the race and on the last lap he had one more kick than I did. I finished 2nd again to a friend I regularly train with, so not half bad I suppose!

Overall I had a blast trying something new and different from my usual 6 hour endurance mountain biking stuff.  I definitely don’t have the pace, tactics and race strategy figured out for this, but I’m looking forward to learning as the season goes on.  The next WAR race is Nov 3rd in Brooksville and we will definitely be there!

Jemma took, um, 1400+ photos that we’d love for you to enjoy. Here’s a sneak peek of some of our favorite shots. Definitely won’t be going quite so crazy next time since it took all week to get them edited and uploaded. Check out the full gallery of 2018 WAR #1 Dan Sullivan Memorial Off Cambah Jammah photos here! Just log in and you can download any pics to use for free! 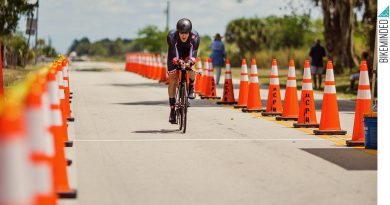